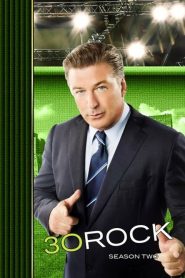 The second season of 30 Rock, an American television comedy series, originally aired between October 4, 2007 and May 8, 2008 on NBC in the United States.

In a season shortened by the 2007–2008 Writers Guild of America strike, the fifteen episodes of the season initially aired as part of NBC’s “Comedy Night Done Right”. The 30 Rock season two DVD box set was released in Region 1 on October 7, 2008 and subsequently released in regions 2 and 4.